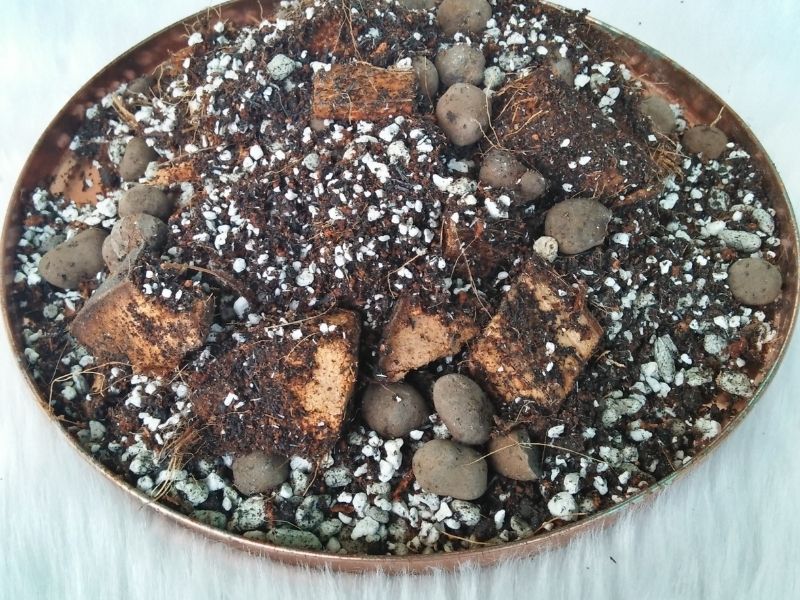 Taking care of aroids requires some special care compared to other houseplants.

Aroid plants are part of the Araceae family, and include a variety of plants, from pothos to monsteras to philodendrons to anthuriums to syngoniums to alocasias and so much more!

Aroids are tropical plants found on every continent with the exception of Antarctica (conditions aren’t exactly tropical there!).

They tend to grow along the jungle floor in tropical rainforests, and as a result, they have adapted to lower-light conditions, preferring indirect or dappled light as opposed to bright direct sun.

This makes aroids the perfect houseplants, since they are quite adaptable to a variety of light conditions — even lower-light!

However, keep in mind that all plants require light to thrive, and generally, the more light you give them (without totally burning them), the more growth you’ll see!

Another thing to know about aroids is that they require well-draining soil to grow at their prime.

Like succulents, aroids don’t do well with typical potting mixes that you’ll find in garden stores. Rather, they require a special blended mix in order for aroids to thrive!

You can buy your own pre-blended aroid mix online or in stores, but it can be a lot of fun to create your own aroid potting mix!

Not to mention, you’ll save a lot of money doing it this way.

In this post, we’ll explain a little bit about what kind of potting soil aroids need and why, and then we’ll give you a few different “recipes” for DIY aroid potting mix!

Why Do Aroids Need a Special Potting Mix?

When in their native environment, aroids grow shallow roots along the rainforest floor. They have adapted to these conditions, and you’ll want to mimic them at home.

The rainforest floor is typically rich in organic material (from the natural decay of both broken off bits of canopy and other aroids along the forest floor), full of lovely nutrients for the aroids to enjoy — and create explosive growth!

Because of the constantly composting nature of the forest floor, the top layer of soil you’ll find is chunky and aerated and drains well because there is lots of oxygen between the different decomposing elements.

It is really important to aroid root systems that oxygen is readily available, and that’s why aroid potting mixes need to be chunky rather than fine and prone to compaction.

Aeration is key to making sure these plants roots grow happy and healthy, so be sure to provide them with well-aerated soil mix!

Additionally, aroids like to be moist (they do grow in rainforests, after all) but like all houseplants, they can be susceptible to root rot if they sit around in water for too long.

In a natural rainforest environment, water will soak into the top layer where the aroids root first, and then sink into lower layers of soil.

You will need to make sure that when you water your aroid, that you allow the water to run through the drainage holes before putting your aroid back into any cache pots or its saucer.

Is This a Good Monstera Potting Mix?

Since this is a site that focuses on Monstera plants as well as other aroids — you bet we’ve tested out this soil mix on our monsteras and indeed, it works quite well!

Monstera potting mix must be chunky and well-aerated, while also having things that can hold some moisture without creating conditions that lead to root rot.

What To Include in Aroid Soil Mix

One of the most key aspects of plant care for aroids is making sure the substrate (potting medium) is just right.

There are many ways to create a healthy aroid soil mix, but having the right ratio is key!

I suggest the following ratio, originally created by Steve Lucas in this post about growing philodendrons and with a small tweak for sustainability reasons.

I use a similar ratio, but I suggest swapping out peat for something more environmentally friendly. (Here’s why I don’t use peat in my aroid potting mix).

Instead of peat, I use coco coir (sometimes called coco peat) which is a natural product that derives from coconuts.

Not only is it great for your plants, it is a sustainable way to reduce waste in the coconut industry. It utilizes the fiber in between the outer husk of the coconut and the coconut itself.

(I also don’t use sphagnum moss for sustainability reasons.)

It may seem complicated, but it’s easy to remember if you think backwards: 4-3-2-1!

So for every one coop of perlite, use 2 of coco coir, 3 of potting mix, and 4 of orchid bark.

The largest percentage of your aroid soil mix should be orchid bark.

Orchid bark is useful for far more than just orchids! First of all, let’s get one thing clear: orchid bark is so named because it’s good for orchids, not because it comes from orchids!

Orchid bark comes from chunks of tree bark, typically fir trees. The chunky nature of this bark makes it perfect for not only orchids but any plant that loves good drainage, like aroids!

The fact that orchid bark is chunky allows it to aerate soil and allow for proper drainage while avoiding the compaction that can happen with a just-plain-potting-soil substrate.

Orchid bark also allows some absorption of water into the bark, which gives the soil just enough water retention to stay moist without overwhelming the root system and causing root rot.

Having a large part orchid bark in your aroid potting mix ensures you’ll have well-draining yet moist soil: exactly what your aroid wants!

You can also use a 50-50 mix of orchid bark and LECA (lightweight expanded clay aggregate) if you want.

Orchid bark will break down over time, whereas LECA is inorganic and will not break down. This will extend the life of your potting soil a bit.

The second largest percentage of your aroid soil mix will be standard all-purpose potting mix.

However, it’s important not to use only this, or you will not have sufficient drainage in your soil mixture!

You can use your garden-variety (ha) potting mix, from your local garden center such as Miracle-Gro Potting Mix.

One of the best potting mixes is Black Gold which is a high-quality potting mix that contains compost, organic fertilizer like earthworm castings, and perlite.

Note that both Miracle-Gro and Black Gold do have some sphagnum peat moss in it, though, so they are not the most sustainable brands.

If avoiding peat for sustainability reasons, I suggest this Back to the Roots peat-free soil mix.

The third largest percentage of your aroid soil mix will be coco coir.

I gave my reasons for using coco coir over peat moss above, so I won’t go into it again here.

Just know that is the most sustainable option and it is also fairly inexpensive!

Coco coir is a wonderful organic matter that provides both nutrients and aeration to the plant and is great to use along an orchid bark mix in terms of providing nutrition to the plant.

The smallest percentage of your aroid soil mix will be perlite (or vermiculite).

​Using part perlite in your soil mix is optimal for creating the oxygenation requirements that encourage root growth in aroid plants.

Perlite is a wonderful natural mineral to add to your plants, a byproduct of volcanic material. It’s a naturally occuring substance that will aid in oxygenating your plants roots for optimum growth.

It’s easy to find and you can find it at any gardening center.

Another option is using vermiculite, which is better at water retention but less good at aeration.

Whether or not you use perlite or vermiculite is up to you, but I generally suggest perlite as it’s cheaper!

However, if you are trying to care for some particularly thirsty plants that need a lot of help with moisture retention, you may want to try vermiculite instead.

If you’re using terracotta planters that draw moisture away, vermiculite may also help in extending time between waterings.

Another option is using pumice stone or horticultural charcoal, both of which are also good at aerating plant soil.

However, this is entirely optional and you may not need it depending on the quality of your potting mix and other ingredients!

Allison is a recovering brown thumb turned helicopter plant mom. She lives in California and is currently working on turning her one-bedroom Oakland apartment into an indoor jungle.